The Adventure of
the Cornish Boatman:
Are the Later
Sherlock Holmes Stories
Inferior to the
Earlier Stories?
Part 3 of 3

Many Sherlockians have suggested that the later Sherlock Holmes stories were not quite as good as the earlier ones. Doyle himself mentioned this in his autobiography when he said: 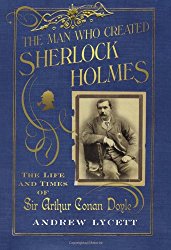 As I pored through them, I realized that the plots in the later stories are every bit as good as those in the earlier stories. Some stories of the period stand out as exceptional: "The Adventure of Charles Augustus Milverton," "The Dying Detective," and even the very last story, "The Retired Colourman."

Some people criticize "The Creeping Man" as unscientific and with a plot concept that lacks credibility. The story idea, however, can be defended easily . Doyle was an avid reader of newspapers, and the concept was newsworthy at the time and even somewhat plausible since science was just beginning to explore the new realm and had not denounced it.

The search for a connection between humans and apes (e.g., the "missing link") and the concept of taking an elixir that could restore one's youth were popular at the time. Indeed, even today the concept appears in occasional stories or movies.

The concept didn't die out overnight. It was still popular when Dorothy L. Sayers portrayed doctors discussing monkey glands as a possible source of rejuvenation in The Unpleasantness at the Bellona Club.

Professor Daniel Robinson has explained that early exploration of astrology led to the scientific study of astronomy and that research in phrenology eventually developed into the more scientific study of psychology. So scientists of the time were fully engaged in exploring these concepts (later abandoned as unscientific) and the public was aware of it because of newspaper accounts.

Even though science may have later discounted the earlier forms, these constituted important research at the time and were stepping-stones to the more fully developed scientific points of view.

Doyle maintained an interest in the scientific research of his day and incorporated them into his stories of Sherlock Holmes if they contributed to a good story. (Indeed, was not Holmes the quintessential scientist? Watson once said to him, "You have made the detection of crime as near an exact science as it is possible" [A Study in Scarlet].)

Over time, I've come to realize that the often-overlooked difference between the earlier and later Holmes stories is the human factor. Who can read the earlier stories, such as "The Crooked Man" or "The Yellow Face," without a pang of emotion? This can be attributed to Doyle's masterful touch of imbuing people with qualities that make them fully human and believable, and that arouse our sympathy.

In the later stories, Doyle occasionally resorted to the use of stereotypes, as in "The Three Gables" or "The Adventure of Shoscombe Old Place." (Both appear in the collection The Casebook of Sherlock Holmes.) Such careless strokes of the pen lessen the impact of the more careful, yet still concise, characterization Doyle was capable of providing. They also reveal the prejudices of the society at large and of its influences upon the author himself. (There is a subtle category of prejudice which comes about from one's naively accepting whole cloth the attitudes of those around him or her, without thinking to question the absurdity of certain values, propositions, or statements.)

This, for me, accounts for the perception that the later stories may not have been as strong as the earlier stories. Some have speculated that the plots began to be re-used, and have supposed this to be the reason later stories may not have shone with the brightness of the earlier jewels. However, we have already seen that Doyle was re-using plots even in the first set of Holmes stories and they came across as fresh and new. (Several of these were published in The Adventures of Sherlock Holmes, which Frederic Dannay [of Ellery Queen fame] and Howard Haycraft consider one of the best books ever written in the detective, crime, and murder mystery category.)

And so I say again, many of the later stories contained plots which were every bit as fresh and strong as those used in the earlier stories. "The Illustrious Client" and the aforementioned "Retired Colourman" elicit an emotional reaction as strong as those raised in "The Crooked Man" and "The Yellow Face."

Doyle himself said in almost the same breath as that in which he quoted the Cornish boatman, "If I have been able to sustain this character for a long time, and if the public find, as they will find, that the last story is as good as the first, it is entirely due to the fact that I never, or hardly ever, forced a story."