"It is a dangerous habit to finger
loaded firearms in the pocket
of one's dressing-gown."

At first, Dr. (later Sir) Arthur Conan Doyle had been wildly excited about his creation.

When he first hung out his shingle in Southsea he had a lot of time on his hands. Few patients came calling for his services. He had always loved telling stories, and friends told him he had a knack for doing so. So he spent much of his time writing and sending out his manuscripts to be published. He was not an immediate success, although he did manage to see his name in print

Among the works he produced during this early time was an interesting piece of fiction called The Firm of Girdlestone. Although it was not to see publication for some time, it eventually did see the light of day. Sherlockians point to it as revealing the background of the woman who was to become the landlady of Sherlock Holmes -- Mrs. Martha Hudson.

In 1887, two of Conan Doyle's works of note were published. One was "The Mystery of Uncle Jeremy's Household," very much in the manner of what would become Doyle's style for the Sherlock Holmes stories. The narrator's name was John H. Thurston (a literary precursor to John H. Watson? Undoubtedly!).

Dorothy Sayers was to write that A Study in Scarlet "was flung like a bombshell on the reading public." Actually, it fizzled. Howard Haycraft's response to Sayers's statement was, "...it may have been flung like a bombshell, but it didn't explode." It came quite close to being the last the reading public would hear of the Great Detective, except for...

The Adventure of the Editor from Philadelphia

Joseph Marshall Stoddart--managing editor of Lippincott's Magazine in Philadelphia, Pennsylvania, USA--sailed across the Atlantic to encourage two authors whom he believed in. He took the authors out for dinner and urged Doyle to write another Sherlock Holmes book.

And so the two fellow lodgers -- Sherlock Holmes and Dr. John H. Watson -- were to go their separate ways. Then Doyle had an important idea... He would write a series of short stories -- all about the same character (Sherlock Holmes!). This was a new concept -- to keep the continuity by following the same protagonist through a series of short stories had never been done quite this way. To be sure, Edgar Allan Poe had written three stories about August Dupin, but these were not produced month after month in sequence.

Doyle approached The Strand magazine. His proposal was accepted, and the rest is history. The public enthusiastically embraced reading about Sherlock Holmes every month; Doyle's efforts created a whole new market for this kind of fiction and for series' characters. And the Holmes stories were collected into two volumes of short stories: The Adventures of Sherlock Holmes and The Memoirs of Sherlock Holmes.

When Doctor John H. Watson was first getting to know Sherlock Holmes, he wrote the following:

But, of course, Watson wrote this before he got to know Holmes better. When he did so, Holmes revealed bits of knowledge and wisdom on subjects that often surprised Watson, as in his sudden and unexpected discourse on religion.

Sherlock Holmes: "Great" and
Master Detective of "The Golden Age"

In his book Murder for Pleasure, Howard Haycraft was to call the period from 1918 to 1930 the "Golden Age" of detective fiction because of the proliferation of "Great Detectives." Julian Symons, in Bloody Murder, was to point out that there was an earlier "Golden Age" of detective fiction, that it was created by Arthur Conan Doyle and his character Sherlock Holmes, and that it came into prominence directly after Holmes was "killed" in the famous incident at the Reichenbach Falls in Meiringen, Switzerland. The death of Sherlock Holmes left a void in the marketplace. And plenty of writers were ready, willing, and able to fill it with detectives and criminals

But after two years of churning out Sherlock Holmes stories, Doyle declared that Holmes "...takes my mind from better things," alluding to his own spiritualistic activities and his desire to write historical novels, as well as other projects.

Here is Holmes's own account of his encounter with Professor Moriarty as he told it to Dr. John H. Watson ("The Final Problem"):

The period after the death of Sherlock Holmes, and before his resurrection, has come to be known among Sherlockians as "The Great Hiatus." Doyle was sick of writing about Holmes, but the public was still enthusiastic about reading him -- or seeing him in action in any form available. American actor William Gillette was called upon to write a Sherlock Holmes play, and was put in touch with Doyle.

When William Gillette was considering how to approach writing a Sherlock Holmes play, he thought it well to provide a love interest for Holmes. Audiences loved romance.

Gillette wired Doyle for his permission: "May I marry Holmes?"

Doyle responded, "You may marry, or murder, or do what you like with him."

These anecdotes demonstrate Doyle's attitude at the time toward his detective hero. But Doyle was not quite finished with Mr. Sherlock Holmes. While he was visiting a friend, he was told a local legend that he thought would make a grand mystery. Holmes, of course, was dead at this time. But Doyle realized that it would make a perfect Holmes story (after he worked through the idea of creating another detective and realizing he already had one).

It was his mother who suggested the perfect solution, and Doyle wrote "The Adventure of the Empty House," explaining how it came to be that Sherlock Holmes -- long thought dead by the public, the police, and his friends -- was actually still alive.

The Resurrection of Sherlock Holmes

So Sherlock Holmes was resurrected. Doyle produced another novel about him -- The Valley of Fear -- and three more collections of short stories -- The Return of Sherlock Holmes, His Last Bow, and The Casebook of Sherlock Holmes. This final collection was published in book form in 1927, just three years before Doyle died.

Holmes was different from the myriads of detectives written about by others. We are privileged to see aspects of his life from before he met his biographer (Dr. John H. Watson) until after his retirement.

Holmes first discovered his great talent for observation and deduction while still a student. No, that's not quite accurate -- he always knew he had that talent, but he thought that everyone had it. Not so! Holmes was to discover the profound impact he was to make on others in "The Gloria Scott," an adventure he told Watson about his first realization that his unique talent was anything but commonplace.

Another early adventure Holmes related to Dr. Watson was "The Musgrave Ritual."

Years later, Holmes retired to Sussex to keep bees and study philosophy. This we know from "His Last Bow," which describes how Holmes comes out of retirement in 1914. He and Watson reunite to confound enemy agents.

These facts have provided fodder for Holmesian scholars to devote much time and energy into arranging all the stories of the Holmesian Canon into chronological sequence. In The Annotated Sherlock Holmes, William S. Baring-Gould has provided his own chronology. His annotations include a synthesis of all the major Sherlockian commentators of the day, with his own reasons for where he agrees or disagrees. (He also includes articles galore on every aspect of Holmes that could possibly be of interest to a student of Sherlock.) 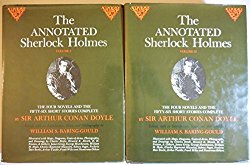 Since the time of Baring-Gould's indispensable two-volume set, Sherlockian scholarship has continued. Leslie Klinger has picked up the torch and has diligently sifted through the several decades of scholarship that was nonexistent when Baring-Gould was writing. Mr. Klinger has produced an entirely new set of books with a similar title: The New Annotated Sherlock Holmes (Novels) and The New Annotated Sherlock Holmes (Stories).  This is not simply an updated version of Baring-Gould's work; it is a worthy addition to the volumes of scholarship Sherlockians have produced and should find its place on the bookshelves of all serious students of Sherlockiana.

How Did Doyle Maintain Such High Standards in His Writing About Sherlock Holmes?

The Sherlock Holmes stories continue to be held in such high regard world-wide that one wonders how Doyle was able to do it. Certainly he must have re-used certain plot elements and/or devices. What did he keep in his "bag of tricks," to pull out and use as needed? And how was he able to misdirect us so we overlooked his sleight of hand tactics? "For a Moment I Thought You Had Done Something Clever" begins to explore this theme. To explore it further, see" 'The Speckled Band' and 'The Copper Beeches': A Brief Comparison." "The Adventure of the Cornish Boatman" probes the speculation by some that the later Sherlock Holmes stories were inferior to the earlier stories.

In time to come, this web page will endeavor to include more articles pertaining to more Sherlockian scholarship, the canon, the Sherlockian apocrypha, pastiches, and Holmes as portrayed in various media:

And if you ever find yourself in Odessa, Ukraine, you owe it to yourself to visit the wonderful people at Cafe Sherlock.

So welcome to the web page "where it is always 1895" (apologies to Vincent Starrett!).