A Quest for the Holy Grail

Alas, alack, it is lost to the ages -- the first dramatization of Sherlock Holmes on radio – “The Adventure of the Speckled Band” – with William Gillette as Holmes (broadcast Monday, October 20, 1930). Gillette also appeared on Monday, November 18, 1935 on the Lux Radio Theater in Edith Meiser’s adaptation of his own play. These two appearances by Gillette on radio remain for me a quest for the Holy Grail of Sherlock Holmes radio dramatizations.

But I’m getting ahead of myself.

William Gillette was a prominent actor who wrote several stage plays, introduced a natural style of acting which was new to audiences of his day, mentored a young Helen Hayes…and became the first great standard for Sherlock Holmes in theater (and, later, was emulated by other actors in film and radio drama).

With the permission of Sir Arthur Conan Doyle, Gillette wrote and starred in a play about Sherlock Holmes.

In “A Scandal in Bohemia,” Dr. Watson tells us, “It was not that he [Holmes] felt any emotion akin to love…. All emotions, and that one particularly, were abhorrent to his cold, precise but admirably balanced mind. He was…the most perfect reasoning and observing machine that the world has seen, but as a lover he would have placed himself in a false position. He never spoke of the softer passions, save with a gibe and a sneer.”

However, Gillette thought a love interest would spark the interest of audiences. He wired Doyle, asking, “May I marry Holmes?”

Doyle, who was tired of writing about Holmes and had Professor Moriarty kill him off in the famous death-struggle that ended with them both falling over the Reichenbach Falls in Switzerland, thought he was rid of Holmes forever. He wired back, “You may marry or murder or do what you like with him.”

So Gillette created Alice Faulkner as a love interest for Sherlock Holmes.

Gillette intended to make some money on the play and then move on to other projects. But the play was so successful that he was called upon to reprise the role (between other plays, that is) for the rest of his life, even coming back to star as Holmes after his retirement. Novelist Booth Tarkington said to him after a performance, “I’d rather see you play Sherlock Holmes than be a child again on Christmas morning.”

William Gillette’s standard for Sherlock Holmes permeated the theater, films, and radio. Subsequent actors emulated him – you can hear it in their voice inflection. If you listen to the scrap of dialogue that Gillette recorded, then listen to Richard Gordon (who followed him on radio), Clive Brook (in film) and Orson Welles (who later played Holmes in Gillette’s play on The Mercury Theatre on the Air radio dramatization) you cannot help but be struck by the profound influence that Gillette generated.

For radio, as well as for films, Basil Rathbone set the next great standard. To be sure, several actors had portrayed the Master Detective in film after Gillette. These include Clive Brook, Raymond Massey, Reginald Owen (who also played Watson to Clive Brook’s Holmes), and Arthur Wontner. But Basil Rathbone (and Nigel Bruce as Watson) made an impact that was emulated by subsequent actors, particularly in radio.

A new standard for Sherlock Holmes was established Jeremy Brett and David Burke were cast in the roles of Holmes and Watson on television in the 1980s. (Eventually, Burke left the series and was replaced by Edward Hardwicke, who maintained the high standards set by his predecessor.)

What Jeremy Brett, David Burke, and Edward Hardwicke were for television, Clive Merrison and Michael Williams became for BBC radio. The same general atmosphere and high standards were achieved. If you are able to acquire these dramas for your collection, and if you have a good sound system in your “home theater,” you will undoubtedly appreciate the outstanding audio quality of this series. If you close your eyes while listening you may well be convinced that the entire cast and set is in your living room! (It is most unfortunate that Michael Williams, husband of Dame Judi Dench, passed away after the final episode was completed.)

The productions include subtle touches that delight many Sherlockians -- they often attempt to answer questions or problems in the Canon. For example, “A Scandal in Bohemia” is the one story that refers to Holmes’s landlady as Mrs. Turner. Throughout the rest of the Canon, Mrs. Hudson is the landlady. In the Clive Merrison version for radio, Mrs. Turner substituted for Mrs. Hudson because Mrs. Hudson was ill. Mrs. Hudson appears later in the show because she is starting to feel better and is ready to resume her normal duties.

Another nice touch includes the use of William Gillette’s play in “The Lion’s Mane.” In the Canon, it is one of two stories written by Holmes’s own hand, and in which Watson doesn’t appear. In the BBC version, Watson comes to visit Holmes and shows him his new manuscript – which the writers based on Gillette’s play. Holmes has written his own account of his new case, and Watson reads it.

Occasionally, though, one wonders why certain decisions were made in the production. In “The Reigate Puzzle” (also known as “The Reigate Squires”), a dramatic scene from the Doyle story is discarded. In Doyle’s story, Dr. Watson writes the following account of an investigation that he and Holmes are involved in. A police official is speaking, Watson informs us, when:

This dramatic episode was discarded for the Clive Merrison version. Why on earth would the producers fail to take advantage of it?

This BBC series is very recent, but already the impact of this new standard is evident in several pastiches with Merrison (and with Andrew Sachs as Watson).

Other Voices of Sherlock Holmes

All of this is not to say that these are the only portrayals of Sherlock Holmes on the radio. A number of superlative teams have kept the memory of the Master Detective green. Among these are:

In “The Blackmailer,” Watson is looking for a fellow lodger to share rooms and expenses. He runs into Stamford, an old friend from school. The exchange of dialogue runs:

Hobbes and Shelley also did a number of adaptations of the original stories, and these were superb as well. They adapted all four novels and many short stories. It is interesting to compare their productions with the Merrison-Williams versions.

For example, Doyle’s A Study in Scarlet and The Valley of Fear could each be seen as two novelettes – part one is Holmes’s involvement in the case and part two is a backstory explaining events that preceded and led up to Holmes’s investigation.

The Hobbes-Shelley versions followed the structure of the Doyle stories. The Merrison-Williams dramas did the same in A Study in Scarlet. But in the Merrison-Williams version of The Valley of Fear scenes from the backstory were interwoven with scenes of Holmes’s investigation.

Robert Hardy and Nigel Stock played in about eight radio versions produced for records. These were very well done, and one wishes that their collaboration had continued.

Nigel Stock played Watson to several other actors. A favorite appearance (or, rather, non-appearance!) of mine was the way he was used in the film Young Sherlock Holmes. Stock was not seen in the movie – his voice was heard (in voice over) as the mature Watson who was reminiscing.

Nicol Williamson, known for his role as Holmes in The Seven Percent Solution, also performed as Holmes on radio.

Robert Powell did a version of A Study in Scarlet for BBC radio.

Roy Marsden and John Moffatt portrayed Holmes and Watson on a number of radio dramatizations produced for airlines and designed for in-flight listening by passengers.

And of course there are numerous radio versions, which I haven’t mentioned due to space limitations. Holmes, of course, is popular world wide, and Ronald Burt De Waal has catalogued radio productions from Denmark, Norway, and Sweden as well as from numerous English-speaking versions.

You may be familiar with the infamous line that is oft repeated by Sherlockian actors in their portrayal of the Master Detective: “Elementary, my dear Watson.”

Hard-core Sherlockians are quick to point out that Holmes never said this in the Canon. He did say “elementary” on more than one occasion, and he did refer to his colleague as “My dear Watson.” But he never combined these into the catch phrase that has become so familiar to film and/or radio buffs.

Clive Brook said it. Basil Rathbone said it. But Sherlock Holmes himself never said it. However, in a radio adaptation of “The Final Problem,” Richard Gordon said it in a slightly different way: “Elemental, my dear Watson.”

To Admirers of Sherlockian Radio Drama, She Is Always The Woman

In “A Scandal in Bohemia,” Watson tells us about Irene Adler: “To Sherlock Holmes she is always the woman…. [W]hen he speaks of Irene Adler, or when he refers to her photograph, it is always under the honourable title of the woman.”

Members of the Sherlockian Baker Street Irregulars (BSI) have begun a tradition of recognizing various women worthy of the title as “The Woman.” For fans of radio, it must always refer to Edith Meiser.

Edith Meiser wrote the first Sherlock Holmes script for radio when she adapted Gillette’s play for the airwaves. She also directed Gillette, and wrote many more radio scripts, which were produced for more than a decade. Meiser also wrote for Richard Gordon, Basil Rathbone, and others. (Even after she stepped down, and Anthony Boucher and Denis Green took over writing for the show, many of her scripts were revived when Tom Conway, and later John Stanley, replaced Basil Rathbone.)

I was fortunate to be invited to Edith Meiser’s apartment one afternoon. She told me about her experience directing Gillette on the radio show. Gillette was eighty years old, and Edith was concerned that he had a long drive home – on his motorcycle! (He lived in Deep River, Connecticut, near the Massachusetts border. His home, known as Gillette’s Castle, is now a historic site, which the public may visit.) After the show, she suggested he stay the night. But Gillette declined the offer (good-naturedly, as Edith Meiser told me). Instead, he rode home that night on his motorcycle. 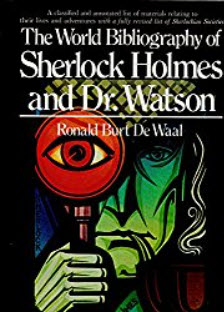 Drew R. Thomas has been a devout Sherlockian for more than forty years. He is founder of The Society for the Immense Knowledge of Sensational Literature (SIKSL), a scion society of the Baker Street Irregulars. This article was originally published in the magazine No Agenda, 2003.