Before discussing Holmes in the movies, I must touch upon two stage productions of Holmes because they were to affect early films profoundly. It is also instructive to learn something about the visual image of Sherlock Holmes and how it developed.

William Gillette was called upon to write and star in a stage production. Charles Frohman asked him to adapt a play originally written by Doyle.

In the canon, Doyle made reference to three specific types of pipe -- the briar, the clay pipe, and the cherrywood. The pipes Holmes smoked all had a straight stem. (At least the briars did. The churchwarden had a longer, slightly curved stem.)

When Gillette performed on the stage, he found it much easier to deliver his lines using a pipe with a curved stem. Since American artist Frederic Dorr Steele used Gillette as a model for Collier's Magazine (Collier's published the Sherlock Holmes short stories in America), the curved-stem pipe worked its way into the visual image of Holmes and carried the image still further. It is now etched in our collective consciousness as the depiction of Holmes, even though many people today may not remember Gillette.

Gillette also influenced how early actors on stage, screen and radio sounded when delivering Holmes's lines. Gillette developed a technique when saying his lines which he said made it sound like he was delivering his lines for the first time.

His delivery was slow, somewhat hesitating and faltering. We know this because during one of his tours as Sherlock Holmes, a professor invited him to his house. The professor had a recording device and asked Gillette if he could record his voice as Holmes.

This recording was on the collector's market and has found its way into the libraries of a number of Sherlockian collectors. After listening to these two scenes, one can easily discern the influence upon other actors, including Clive Brook (in the sound film Sherlock Holmes), Richard Gordon and Orson Welles's adaptation on The Mercury Theatre on the Air (on radio). (Welles's version is available as The Immortal Sherlock Holmes.) So it is clear that William Gillette became the first great standard for Sherlock Holmes (although at least two earlier plays featured other actors portraying the great detective on stage) and was emulated by those who immediately followed. 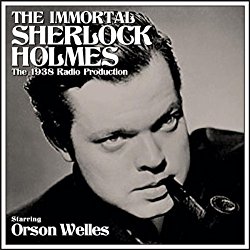 "The Speckled Band" -- the Play

Another stage production was important in affecting the cinema's depiction of Holmes, as well. This came about when Arthur Conan Doyle collaborated with James Barrie on a play. The play was a flop and closed after only a few performances. Doyle and Barrie remained friends but ended their collaboration. (Barrie wrote a letter to Doyle, in which he wrote a humorous Holmes parody, "The Adventure of the Two Collaborators." Doyle published this in his autobiography, Memories and Adventures.)

But Doyle had leased the theatre and would lose money if he failed to come up with a profitable venture soon. Sometime before, he had developed his story "The Speckled Band," into a play but had never presented it. Aware that Holmes was a money maker, he now dusted it off, hired actors, and began rehearsals.

Lyn Harding (David Llewellyn Harding, October 12, 1867 to December 26, 1952) was cast as Dr. Grimesby Rylott (note the difference in spelling from the short story).

During rehearsals, Harding would come out on stage and, in order to depict Rylott's villainous disposition, clench and unclench his hands and make elaborate grimaces and gestures. Doyle didn't like this depiction and tried to get Harding to tone it down. Harding persisted, and the two had a falling out.

James Barrie got wind of this and visited during a rehearsal. When Harding came out on stage, Barrie leaned over to Doyle and said, "Let him have his way."

It is clear from being able to read Doyle's play and view the 1929 film, which was based on this play, that Doyle was well aware that stage (and screen) were a different medium than the printed word and that it could be appropriate to tell the story in a different way. (Though essentially the same story, the stage version of "The Speckled Band" had a longer build up and some minor differences from the short story.)